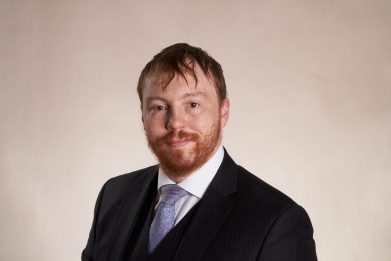 Andrew read Law at the University of Hull before completing his Bar Professional Training Course at Manchester Metropolitan University. He was called to the Bar in 2016.

BPTC Scholarship – Brick Court Chambers Scholarship awarded by The Honourable Society of the Middle Temple (2015)
Jeremy Hyde CBE Prize for the Legal Advice Centre (2015) awarded by the University of Hull for the highest mark in the Law Clinic Module.

Prior to being called to the Bar, Andrew volunteered at the University of Hull Legal Advice Centre where he would deal with a variety of legal issues brought by members of the public, from driving offences to housing possession cases and matrimonial proceedings.
After being called to the Bar and prior to pupillage, Andrew worked as an Advocate for 4 different agencies, providing County Court advocacy in all manner of civil hearings. Throughout his 3 years working for these agencies, he appeared in the County Court on a daily basis on the Northern Circuit and beyond. Throughout his time, he represented Claimants and Defendants at hearings to set aside judgment, applications for summary judgment, mortgage and housing possession proceedings and small claims hearings ranging from noise nuisance to housing disrepair to contractual liability disputes.
Since joining Chambers, Andrew has had particular experience with personal injury trials, housing disrepair and other landlord and tenant disputes.
His recent cases have involved:
• Successfully representing Claimant’s in PI RTA Fast Track trials involving issues of liability, causation and containing counterclaims.

• Successfully representing a Defendant in having an application for an injunction adjourned and settling their housing disrepair claim pre-issue.

• Successfully representing a Claimant in a housing disrepair dispute resulting in a positive settlement for the client.
Andrew is able to quickly develop a rapport with both his Instructing Solicitors and clients. He is able to turn around papers extremely quickly.

Outside of the Bar